HEO+3 Silence Is Over Artists Statements 15-17 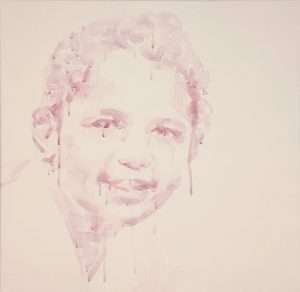 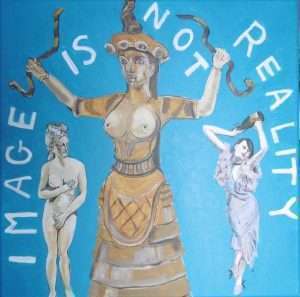 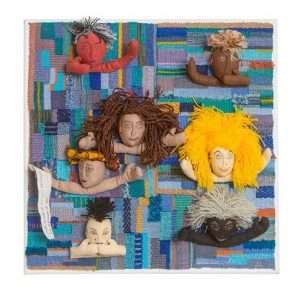 PAULA STEVENS-HOARE, Daddy’s Little Princess, Gouache, £435.00
I mine the family photo album to examine what’s going on behind the obligatory smiles produced for the camera. Viewed in retrospect the atmosphere changes from happy-go-lucky to one of isolation and pain, which I hope to evoke by placing the image of my young-self in an expanse of white. I apply very dilute gouache to a specially primed canvas. Although the drips are not contrived, I hope they bring to mind tears and convey the emotional intensity of a traumatic childhood. The colour of the paint alludes to the rigid gender stereotypes imposed on me. I had no agency over my life. As a girl growing up in the 1960s and 70s, with the legacy of ‘children being seen, but not heard’, I had no voice, but silence is over!

MARY GORDON-SMITH, Image is Not Reality, Acrylic, £150
As professor Mary Beard has pointed out, 3000 years ago a goddess would have looked you in the eye and been forthright. The Romans preferred idealised bodies and the averted gaze. The Victorians ran with this and took modesty to extremes, but today’s model is emerging more as a commercial tool. None of these females would you expect to engage in conversation. From the princess in the storybook to the woman selling soap or presenting the news, we wade through a lifetime of feminine imagery. How many people do we speak with? How many women do you really know? I am as fascinated by fashion and female imagery as the next person, but always remember that humanity is as diverse as the stars and planets. Even within families this is the reality.

JOAN EYTIE KENDALL, ..And there are so many Silences to be Broken, Embroidered, woven,stitched, £350
Most of my professional life was spent developing strategies and practices in organisations to overcome the effects of discrimination and marginalisation.  A tall order then and now! While I know we have come a long way since I began this work in the 80’s, I also know that we have a long way to go. As an older, black woman with many years of both silence and speaking out behind me, I stand with Audre Lorde and her affirmation that “your silence will not protect you”. Having now found a more creative and heart-inspired way to keep speaking out, I am both saddened and delighted to be part of this exhibition. I celebrate our strength in speaking out, and the energetic freedom that flows from this, enabling growth and transformation. The woven background cloth locates the energy for this change within the chakras, particularly the throat and the solar plexus.

During the next few posts we will be featuring the artwork and statements from artists participating in Silence Is Over in June 2018 at the Portico Gallery. Over 20 female artists had their say on a blank canvas on the subject of coercive control and sexual abuse. The canvases were assembled into two billboards to create a wall of unity. Traditionally used for advertising, often objectifying women, the billboards served as a reclaimed space where the female voice could be heard.
Artworks are shown in the order they were displayed on the billboards. The statements were an integral part of the exhibition.