HEO+3 Silence Is Over Artists statements 4-6 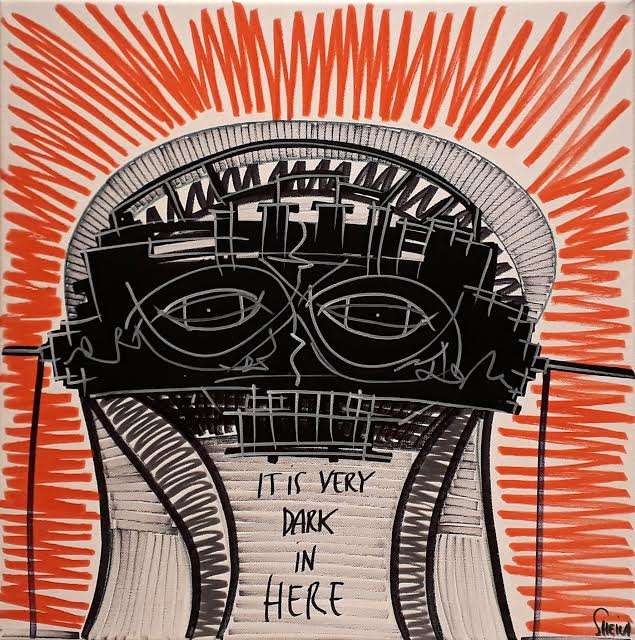 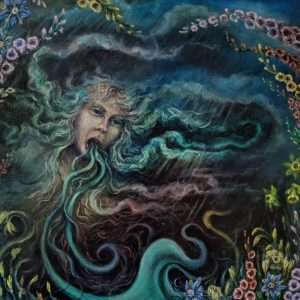 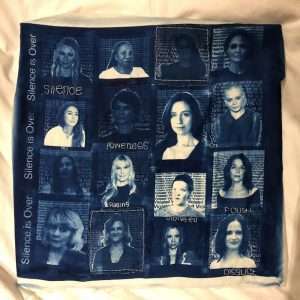 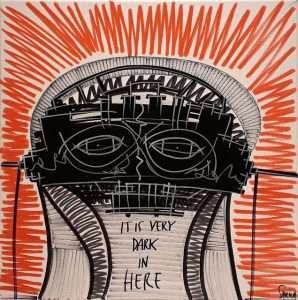 The invigilating table at the Private View

MARNIE PITTS, The Purge, Acrylic on Canvas, £390
My symbolic painting “The Purge” is about hope, healing and recovery. A storm has gathered, settling in all around her creating a stifling atmosphere that is no longer able to be contained inside, in silence. It breaks free, taking a multitude of paths. Some that just end in a tangle, but others move forward with more force. These stronger outlets feed new growths, initiating blossoms and new beginnings. I have used the language of flowers to suggest what might come from allowing the purge, hope represented by daffodils, courage by Borage and strength with Gladiolus.

KY LEWIS, Seen Not Unheard, Cyanotype emulsion on cloth with embroidery, £460
I felt I needed to do this project not just as a female artist and photographer but as a mother and a woman. I had read, with difficulty, the stories held close to the hearts of those affected by the Harvey Weinstein case and debated about exploring similar within the photographic world, wondering if the casting couch also had parallels within that environment, I’m sure there are.  I decided instead to concentrate on sharing the words that the women had finally spoken, they stuck with me. Their words, the quotes frame their images, a whisper at first growing to a shout, a repetition that we should all hear and not be afraid to vocalise anymore. The photographic approach to this is a core part of my practice and also a change as I usually work with more organic methods. This project brought focus and a lot of thoughts to the table.

SHEILA FRATINI, It Is Very Dark In Here, Mixed media (acrylics, permanent markers and uni posca), £200
My work aims to take the viewer to a journey to the inner emotional world of a woman, any woman, anywhere in the world, trapped and forced into an abusing situation she hasn’t chosen to be in. Every day, all over the world, we hear far too many harrowing stories of sexual abuse, domestic violence, abusive religious fundamentalisms and all sort of mental and physical subjugations towards women that it becomes almost impossible not to be deeply moved by it. The simplicity and graphic like representation of my portrait aspires therefore to prompt an immediate visual connection with the audience with the aim to encourage the thought of what it must feel like being in such a dark place and not being able to do anything about it.

During the next few posts we will be featuring the artwork and statements from artists participating in Silence Is Over in June 2018 at the Portico Gallery. Over 20 female SLWA artists had their say on a blank canvas on the subject of coercive control and sexual abuse. The canvases were assembled into two billboards to create a wall of unity. Traditionally used for advertising, often objectifying women, the billboards served as a reclaimed space where the female voice could be heard.
Artwork is shown in the order they were displayed on the billboards. The statements were an integral part of the exhibition.