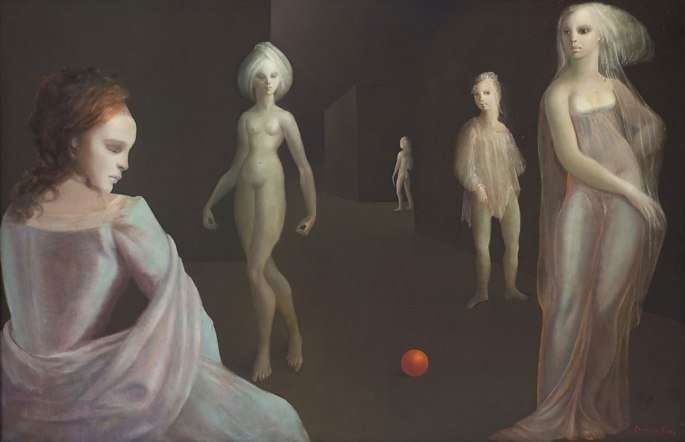 By Melissa Budasz for ArtVerve, June 2017

“I am independent. I am free. I am not a surrealist and beyond classification.“

Unconventional, free-thinking and experimental, Leonor Fini was once the ‘it-girl’ of Paris and was one of the most photographed women in the art world. Known more perhaps for her flamboyant nature and penchant for dressing-up and cross-dressing rather than her painting, she had an illustrious career in theatre and set design, illustration, product design and film too. However, it is her status as a painter that needs to be examined so we can appreciate her unique influence on 20th century art history.

Born in Buenos Aires, Argentina (1907) to mixed Argentine, Spanish, Italian and Slavic blood, Fini fled with her mother at two years old to Trieste, Italy, to escape her father. There are stories of her father’s plots to kidnap her, and Fini was disguised regularly as a boy. As a teenager, she spent months with her eyes bandaged whilst suffering an ocular ailment and when they were eventually removed, started expressing her inner thoughts and visions through painting. Her rebellious spirit led her to be expelled from several schools with no formal training in art. Much of her art was exhibited in surrealist art exhibitions in the 40s and 50s, but although her painting had elements of surrealism she refused to be labelled a surrealist or a feminist – she was too aware of the complex ways many of the surrealist male artists conceptualized and identified women. She once said of her painting process,

“I strike it, stalk it, try to make it obey me. Then in its disobedience, it forms things I like.”

She arrived in Paris in 1932 and quickly broke into the avant-garde art scene, becoming like several other important woman artists of the time loosely associated with the Surrealist movement at a time of its ‘golden age’ when it was becoming more visible to the public at large.

Salvador Dalí was once quoted, in a blatantly misogynistic assessment of her work, that she was, “better than most, perhaps. But talent is in the balls.”

This was a stereotype of the time and creativity seemed to be a male attribute and right, therefore women were instantly excluded from the domain. This perhaps explains why Fini and many of her female contemporaries distanced themselves from the Surrealist movement so that they could relate their own ideas about female sexuality and the expressive representations of women by refusing to be the object of another’s desire. Fini subverts preconceived gender roles and social codes – the women in her paintings point to empowerment and liberation. She is (whether she admits it or not as she adamantly refused classification) a feminist, and her idea that woman is complex and ambiguous creates a fluid and more open identity for women to explore.

She was said to have once brazenly asked Picasso why he kept doing “the same old shit.”

“Have we not known for a long time that the riddle of the sphinx says much more than it seems to say?”

A predominant theme in Fini’s art is the complex relationship between the sexes, primarily the exchange between the dominant female and the passive, androgynous male – connecting her with other women artists that have focused on this shift of power and subversion of the male gaze, for example Sarah Lucas, Kiki Kogelnik, Cindy Sherman and Barbara Kruger.

“I see my work as a series of attempts to ruin certain representations and to welcome a female spectator into the audience of men. If this work is considered incorrect, all the better, for my attempts aim to undermine that singular pontificating male voice-over which correctly instructs our pleasures and histories or lack of them.”

“Marriage never appealed to me, I have never lived with one person. Since I was 18, I’ve always preferred to live in a sort of community – a big house with my atelier and cats and friends, one with a man who was rather a lover and another who was rather a friend. And it has always worked.”

Her work connects women to the universe, to the land and to myth. She rejected the idea of being anyone’s muse. Her figures – the sphinxes, cats, nymphs, priestesses, nudes – are all bold declarations of a woman’s sexuality that convey a powerful feminine subconscious. The myth of the sphinx offered surrealism many narratives, from an exploration of desire to existential anxiety. In Fini’s work the sphinx questions gender stereotypes, from the muse to the maternal, and offers an iconography which goes beyond woman as the source of male creativity or as a source of procreativity alone. The sexual hybridity of the sphinx as half animal/half woman and the role of the sphinx as guardian/protector, reinforces Fini’s vision of a natural and erotic feminine force, in charge of her powers.

Fini was also renowned for her theatrical set-design, costumes and posters which she often did not get credit for. She designed costumes for ballets and famously fell out with Dame Margot Fonteyn who refused to wear the cat mask Fini had designed for the ballet in Paris (1948), “Les Demoiselles de la nuit.“ Even though the set collapsed whilst Fonteyn danced, the two women made up and remained friends for years. She also designed the costumes for Castellani’s Romeo and Juliet (1954), was one of the costume designers for Federico Fellini’s semi-autobiographical film 8 ½ (1963), and designed the costumes for John Huston’s A Walk with Love and Death (1968) staring Anjelica Huston. Fini’s design for the bottle of perfume Shocking by Schiaparelli (1937) later influenced Jean Paul Gaultier’s design for his own perfume (1995), a bust-shaped bottle etched with a corset. The shoe designer Christian Louboutin has also designed and named a pair of shoes in homage to Fini.

In 1965 Fini was given a retrospective in Belgium, then Japan (1972) and in Paris (1986). Since her death, she has had retrospectives in Trieste (2009), New York (2010), and in Sweden (2014). Despite the mark Fini left on those around her she has often been relegated to the footnotes of articles and books on Surrealism along with many of her female contemporaries. Unfortunately, this story is one we are familiar with, there are too many examples of important women artists that have had to be unearthed again and their names put back into the history books –  Artemisia Gentileschi, Ana Mendieta, Camille Claudel, Edmonia ‘Wildfire’ Lewis, to name just a few that have been rescued from obscurity. It seems that a woman who, through the strength of her personality and her art, succeeds against the odds, is then erased from view as soon as she dies.

Fini’s work is included in three shows currently – a solo show at Galerie Minsky in Paris, and her work is included in a group show at White Cube Bermondsey, Dreamers Awake, works of up to 50 women artists from the 1930s to today exploring the influence of Surrealism. The perfume bottle Shocking she designed for Elsa Schiaparelli is currently on view at Somerset House’s exhibition, Perfume: A Sensory Journey Through Contemporary Scent.

Leonor Fini’s legacy is immense as she did so much in her lifetime personally, professionally and artistically. She is an inspiration and beacon to young women artists and her work must be evaluated, celebrated and enjoyed.

© All images Estate of Leonor Fini.

You can see Leonor Fini’s work in the following exhibitions: 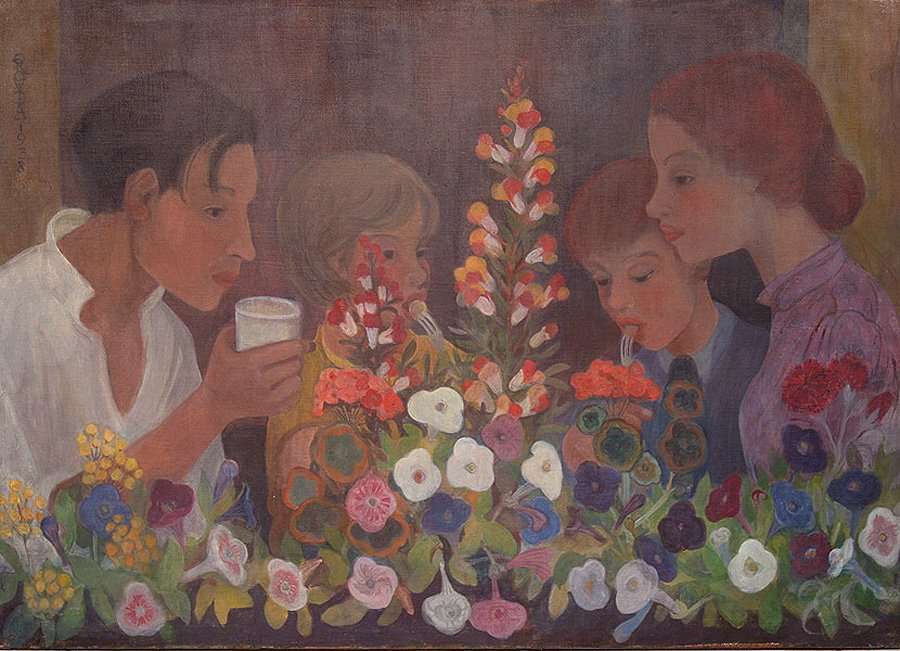 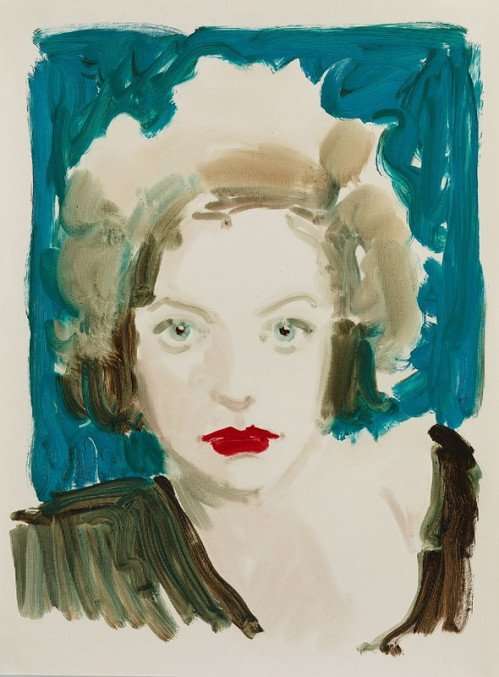