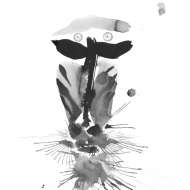 2017: Grass Roots, Woman Made Gallery, Chicago, USA. ‘Growth of the Soil’ was selected for inclusion in this group exhibition, showing works that investigate the natural environment and our place within it.

2017: Kuuki, The Roper Gallery, Bath, UK. Juried exhibition with the aim of “using art as a platform for debate and collective awareness regarding environmental concerns.”

2016: Vanishing Species pt.ii, The Crypt Gallery, Euston, London. For this solo exhibition Bethan presented a large body of work reflecting on the deteriorating state of the animal kingdom. The exhibition featured a menagerie of life-size drawings and sculptures of endangered animals from Britain and around the world. The exhibition was presented in collaboration with World Land Trust and coincided with the UN International Day for Biological Diversity. 25% of sales were donated to the World Land Trust’s Atlantic Forest conservation project.

2015: Vanishing Species, Co-Exist, Bristol, UK. As part of the Big Green Week in Bristol, Bethan exhibited life sized drawings and sculptures of endangered animals & gave a percentage of the profits of sales to the Soil Association.

2014: A Dip in the Potion, collaborative show with The Minesweeper Collective, London (Group)

2012: Residency at Comunidad Inti Wara Yassi wild animal refuge in the Amazon rainforest, Bolivia. During a one month period at the refuge, Bethan drew rescued wild cats, monkeys and birds. Her works were commissioned or auctioned off to raise funds for the charity.

2011: In the Between, The Horse Hospital, Bloomsbury, London (with Cian O’Neill)