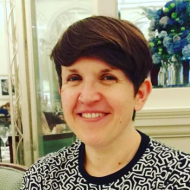 Julie Bennett is an artist whose work critically engages with the discourse surrounding the cult of celebrity in contemporary society.